A re-visit or virtual travel after gap of eleven years (2009) and Beijing, like rest of China, still remains an enigma. Its latest product, Covid-19 or Corona virus, lives up to the ‘humongous’ attitude of the country…..expandable enterprise. As we, all over the world, battle with inevitable lockdowns, a virtual visit brings back memories of a city that is a constrasting bouquet of culture and materialism

Beijing 2009: The ‘color-me-blue’ permanently grey skies over Beijing set the tone of the 2009 July trip. Add to this the sheer size and volume of the city and you begin looking for the real and authentic.

China has been around centuries with travelers flocking by land or sea to its boundaries and writing about its art, culture, architecture and vastness. The different accounts contribute to this effervescent aura of exclusivity that refuses to fade even with the county opening its red doors to the world public. For Indians, China has always been an inscrutable neighbor: study chapters on travels and travails of Buddhist scholar Hsüan Tsang, Mongol rulers Genghis Khan and Kublai Khan, the Indo-China border skirmish of 1960 and in the present the ever-growing popularity of Chinese cuisine turning into special brand of Indian/Chinese food and the all-pervasive China manufactured products replacing everything Indian. 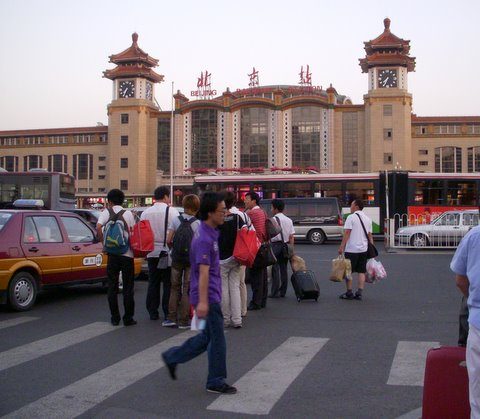 Staying in Hong Kong a China visit is compulsive.  The first impression on stepping out of Beijing West Railway station is one of awe. Being an Asian from an Asian country the masses were nothing new, it was the dimensions that enhanced the prosaic ambiguity of the city. The ‘wider’ roads chock-a-block with bumper to bumper automobiles in all brands, shapes and sizes replacing trademark cycles; the  ‘Big Boxer’ new Central Television Tower and massive structures in earthy dull browns intermittently touched up with red, yellow, green and blue. Here was no ‘paper dragon’ but a dragon thumbing the world.

The Forbidden City: The painted, decorated and several tiered vermillion roofs of Forbidden City shine bright and distinctive and I followed the crowd admiring the art and craft work of the roofs. The same roofs when viewed from the opposite Jingshan Park seem orange. Jason Becker in THE CITY OF HEAVENLY TRANQUILITY writes ‘If you spend too long wandering the Forbidden City it seems a claustrophobic maze.’ I agree  because after some time you do get tired walking around courtyards and passages or looking at empty shells imagining the grandeur of the 24 Emperors who lived here. One can take guided tours to feel more involved with the history and architectural splendor of the City, but it is more interesting watching reactions of fellow tourists and seeing the place through eyes of local visitors. Till few decades ago the Forbidden City was a restricted place, hence the name Forbidden City, and now the crowds walk around feeling one with the mighty walls and gates. 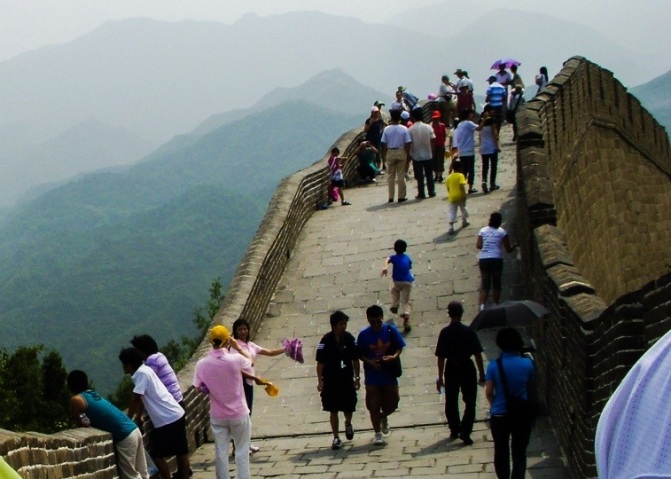 The Great Wall of China is a humbling experience that every tourist, whether country head or ordinary citizen, wants to experience. Standig atop this sheer audacity of labor and material swamps you with megalomaniac feelings and you look down at mere mortals trying to make their way up. The Ming rulers constructed the wall as deterrent to enemy conquests while present government uses it as a muscle flexing symbol. No wonder Barack Obama comes across trying to figure out his place in scheme of things. I did the Badaling Section admiring the natural surroundings and the sinuous length of the Wall, climbing, dipping, and bowing to all and sundry.

From the Great Wall it was the turn of Ming Tombs, a waste of time except for the country view and the citrus orchards on the way. 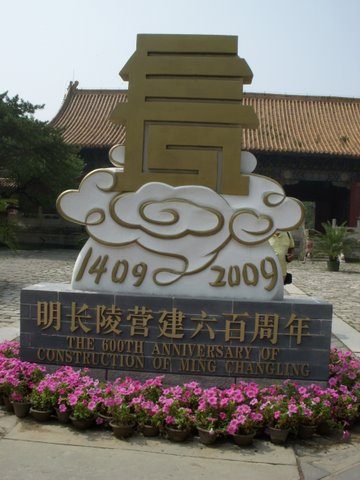 I had taken a tour for the three places but avoided other equally important tourist favorites, the Summer Palace with its Longevity Hill and Kunming Lake and the Museums, Art Galleries especially the Da Shanzi or 798 Factory district, Malls and antique and furniture bazaars. The newer Olympic constructions circling antiquity, the Birds Nest and the Cube, somehow appear as anomalies and maybe in few years time will be extensions of the massive constructions. 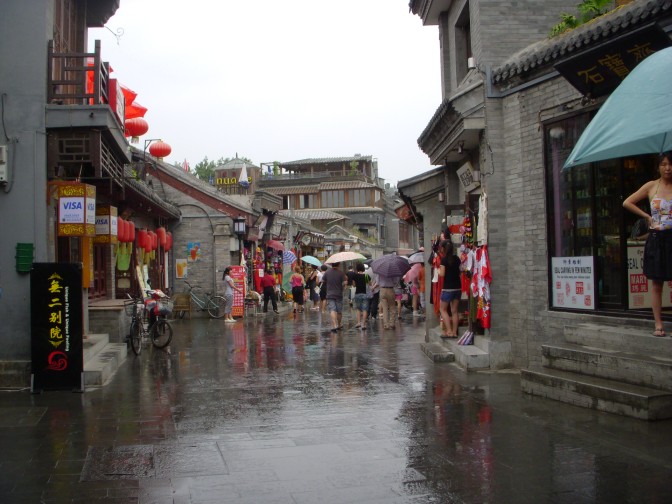 The rickshaw ride into Shichahai close to the Forbidden City turned out to be interesting peek into the past.Shichahai of the Jin Dynasty 1115-1234 era, is a famous scenic area that includes three lakes the Qian Hai or Front Sea, Hou Hai or Back Sea and Xi Hai or Western Sea along with remnants of old-style Beijing residences and courtyard homes. The 232 meters long Yan Dai Xie Jie or an oblique street resembling a long-stemmed pipe, winds it way from the Drum Tower to Yinding or the Silver Ingot Bridge. This street was once famous for shops selling long-stemmed pipes. The rickshaw wound its way via Houhai Bar Street and the Yinding Bridge to the tiled market with stores specializing in curios, national dresses, kites, paintings and tiles, tea products and tea sets, antiques and craft work and Indian dresses. Hutong is a Mongolian word meaning ‘water well’ and originated during the Yuan Dynasty (1271-1368). At one time Beijing had nearly 3200 hutongs of which about 900 still remain. In Xicheng District alone, from the 1960s to the 1990s more than 260 hutongs were cleared to make way for the Financial Street (supposedly a clone of the Wall Street). 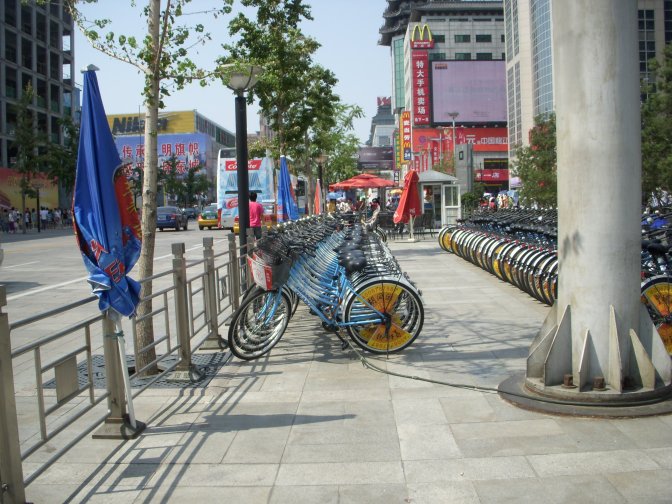 Another interesting place is Wanfujing Dajie, the 700 year old Commercial Street, starting from East Chang’an Avenue to China Art Gallery. It is the pedestrian market area of street stalls, department stores selling western brand names and shops with every available item from paintings and painting material, craft works, antiques, clothes and hat shops. I tried out hats in a store, selling hats for nearly 100 years, and none fitted me. Maybe Indian heads are smaller than Chinese ones.  Finally saw the trademark cycles of China, but mechanized ones chained together. The street was by now crowded, especially the food court  but I avoided the food because to me Chinese food is the Indian version of Chinese what we get in India.

The visit came to an end with the feel that there was more to be seen and discovered. Here was a new Beijing on foundations of the ancient, an exercise completed at the time of 2008 Olympics. China got a chance to make its debut into the modern world with skyscrapers and malls replacing hutongs and old buildings, a city rolling out of its covers.

There was a rumor during the Olympics (2008) that the grass along the pavements were painted green to impress the Olympic inspectors. Looking skywards one wished that the same could have been done for the skies, blue with a bright yellow sun to project a sunny side up of Beijing.

* Hsüan Tsang (602-664) was the most famous Chinese Buddhist pilgrim and traveler in India and translator of Buddhist texts. His “Hsi-yü Chi” or “Record of Western Countries” is an indispensable source book to students of 7th century India and central Asia.

* Marco Polo came to Kublai Khan’s capital Dadu, what is now part of present day Beijing. He was a gifted linguist appointed by Kublai Khan to his administration. Marco Polo would later write about the splendors of the summer palace of Shang-du or Xanadu of Kublai Khan somewhere in Inner Mongolia, 275 km from Beijing. This was later an inspiration for English poet Coleridge poem about Kublai Khan and his pleasure dome in Xanadu or Shang-du.