The preoccupied, vanilla looks, smooth and frosty encountered on streets, public transport and housing and shopping complexes replaced by unsure and jittery, shaking numbered bamboo sticks in a bamboo cylinder. The intensity of their faith is relayed on to me and I to shuffle the sticks hoping to steer my fortune or future along a virtuous path.

‘ Majority are from the Mainland’. I look around and sure enough there are flag-waving guides herding their queues through the Temple. We are at the Sik Sik Yuen Wong Tai Sin Temple in Kowloon dedicated to the famous monk Wong Tai Sin or Huang Chu-ping, a humble shepherd from Zhejiang province. At age 15 Wong Chuping became a follower of Taoism and forty years later attained enlightenment with his influence as a healer and harbinger of good fortune crossing the borders of Guangdong Province to Hong Kong in the early 20th century. In 1915 his image was brought to Hong Kong and installed in a temple in Wan Chai. Later it was moved to Wong Tai Sin Temple, a Taoist temple established in 1921.

‘You should shuffle with your heart and at same time ask what you need or want’. I did just that till finally a stick slid out to fall on the floor where I was kneeling on a cushion. My friend noted down the number and my request and I shuffled thrice getting up with four numbers and four requests. ‘If you are really sincere you should promise to return to thank with offerings’ more instructions and I could see platters of fruits, food and sweets, testimony to numbers of fulfilled wishes.

We had already offered lighted incense sticks at the main altar. In due diligence to the continuous announcement to limit the incense sticks I took 9 out of the packet of 18 leaving rest at the counter. Prayers and requests over we joined the people roulette along the newly renovated Temple with extravagantly ornate red pillars, golden roof adorned with blue friezes, latticework and multi-colored carvings complimented by greenery and incense smoke. The Daxiong-baodian or Grand Hall, Sansheng Hall, the Good Wish Garden, the three memorial archways, the Nine Dragon Wall and the Good Wish Garden said to be a miniature copy of Beijing’s Summer Palace add to the architectural splendor of the Wong Tai Sin Temple, home to three religions, Taoism, Buddhism and Confucianism.

Reverence was taking a drubbing as we headed towards the fortune-telling area through a corridor lined with kiosks overflowing with religious and luck items. A benign smile drew me towards the portly person sitting behind a table and I handed him the numbers with the request list. The stick numbers were matched with his chits and reading the first one he mumbled something which our Hong Kong friend translated into ‘your head is in the clouds’ or something similar. Some of the seriousness got lost in the translation especially the poetic or classical references but I could sense that the fortune-teller was reveling in his craft. There are English-speaking fortune tellers too but we preferred a local language speaker probably looking for authenticity. The pattern is somewhat similar to the ‘Prashanwalli’ or question in Indian astrology where your question is answered based on time, date and place of birth. Some of what was told to me was close and rest I will have to wait to happen in immediate future

A line of intent faces, young and old, absorbing and dissecting the future and the past along the corridor. I was not alone and did not mind parting with Hong Kong $ 84 for four requests. 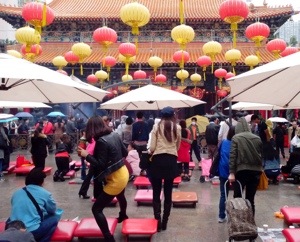