Standing tall amidst the structured desolateness is the iconic Peggys Lighthouse .

Day 3….early morning we are on way to Peggy’s Cove Lighthouse, also known as Peggy’s Point Lighthouse, located in the quaint fishing village of Peggy’s Cove along the South Shore, 29 miles of Halifax. Readers might wonder why I am sharing now, after three years. 2017 was a momentous year… two sublime trips, Sikkim and the Maritimes Canada. The year ended with a thud…an Open heart surgery for me followed by a break year 2018. Back on my feet in 2019, I boarded the travel bus for trips to Maldives, Hong Kong, Canada and domestic (India) travels, nothing strenuous. 2020 and 2021 the Pandemic years, a blessing to renew, rejuvenate and thumb through my notes and pictures. I shared snippets of the Road trip for various blogger challenges but here is the trip in entirety (parts).

Nova Scotia is dotted with over 160 historic and world famous lighthouses but for us it was this ‘svelte beauty’ this legendary Lighthouse that was a must visit. Constructed in 1915 there are numerous tales fabricated around what was a beacon of hope for sailors and fishermen braving stormy and lashing waves of the Atlantic waters. One story is that the Cove was known as Margaret’s Cove because of its proximity to entrance to St. Margaret’s Bay. With time it was abbreviated, to Peggy’s Cove. The second legend, romantically pedantic, is linked to a book  ‘This is Peggy’s Cove,’ by local artist William deGarthe. The writer describes the shipwreck of a Schooner on Halibut Rock, close to the famous lighthouse, that runs aground with everything lost except for lone survivor, a young woman named Margaret. She remains in the area, marry’s a local man and gets the Cove named after her.

A Shakespeare amongst us might say ‘What is in a name’ because call the lighthouse by any name and it will still be an ‘object of beauty’. Although this unique Boulderish environment has been designated a preservation area, it is natural to be tempted to traipse on the rocks to manoeuvre closer to the Lighthouse as one can go up to the top. Visitors are cautioned to be careful of the slippery rocks as one wrong step and you are kissing the rough ocean waves.

Standing on a safe, stable boulder, closest to the shore, I gaze at the suns rays pirouetting on the mildly calm waters, mesmerised by the vast loneliness.

We bypassed the colourful Peggy’s Cove village with its moored lobster boats and pubs and eateries for the Memorial for the victims of an air crash in 1998.

On September 2, 1998 Swissair Flight 111 had crashed into the Atlantic Ocean southwest of Halifax Stanfield International Airport at the entrance to St. Margaret’s Bay. All 229 people on board perished.

A short walking trail (160 m) leads to a monument near Peggy’s Cove at a rocky spot called the Whalesback. A second memorial and mass grave was erected directly across St. Margaret’s Bay in Bayswater.

From the Whalesback, it is a magnificent view taking in the whole of the Bay and the distant horizon. The shadow of the crash and trapped helpless people flits past across the empyrean canvas. It is time to move on.

Lunenberg…From Peggy’s Cove we drove to Lunenberg, a hour and half drive via NS 103 W. The Acadians referred to it as ‘Mirligueche’ renamed Lunenberg by the British in honour of King George II, Duke of Brunschweig-Lunenburg. In the present ‘it is a fascinating blend of history and real life’…

The Old Town Lunenberg, a UNESCO designated World Heritage site, is a flamboyant presentation of original 18th and 19th centuries colonial architecture. The bright yellows, greens, magenta, highlight the cerulean blues of the lapping waters and the sky overhead and you are in a children’s story book land. What was missing was ‘the Chocolate house’.

A walk on the Broadwalk did not reveal any thing chocolaty but a stack of schooners, boats adding credence to Lunenberg’s seafaring and rum-running traditions.

The showpiece was Canada’s iconic Bluenose II, a replica of the original Bluenose schooner launched in 1921 that had raced undefeated in international competitions for 17 years. It is Lunenberg’s and Nova Scotia’s brand ambassador. https://en.wikipedia.org › wiki › Bluenose 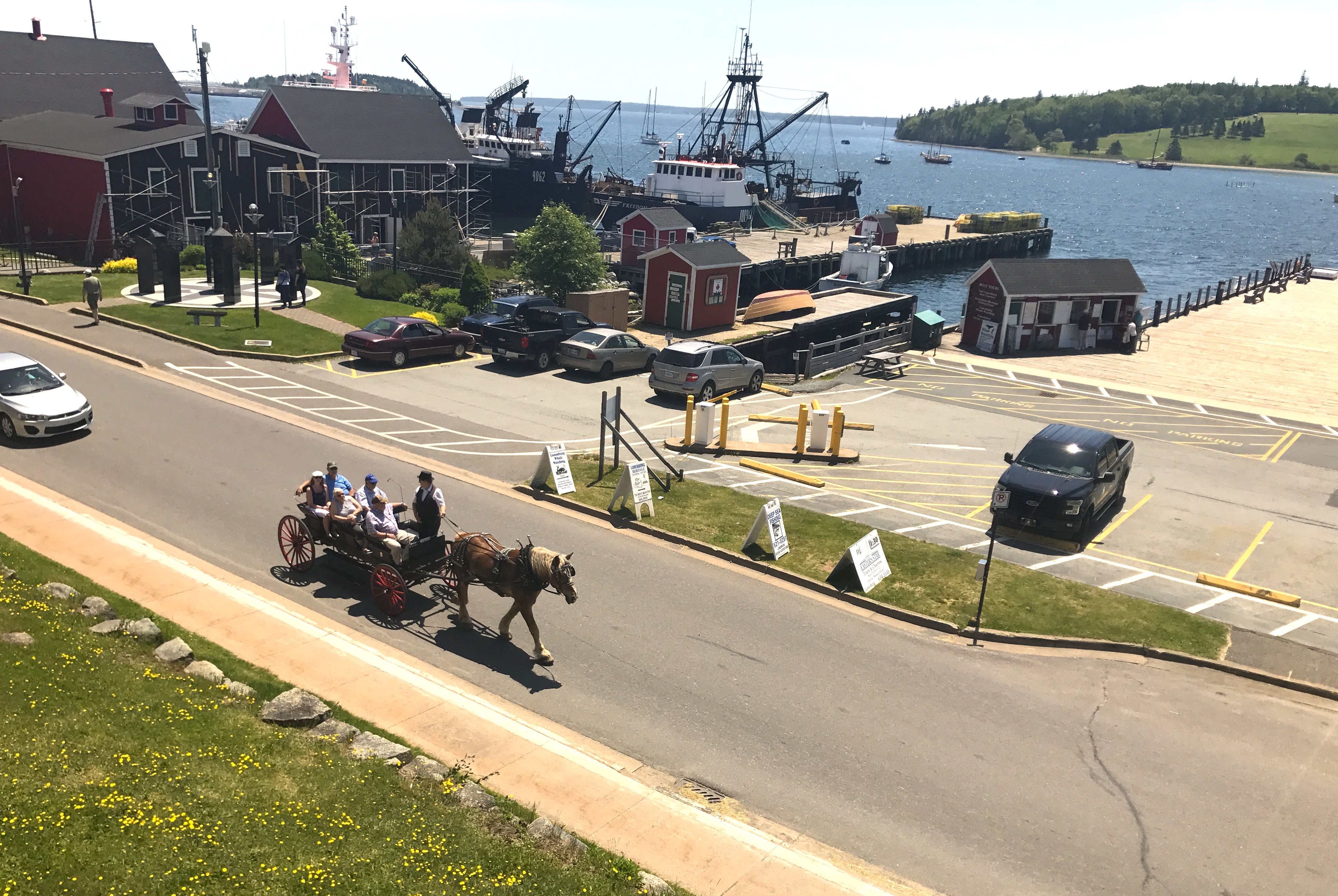 It is busy summer touristy day and we join the crowds on the hilly streets filled with amazing restaurants, breweries, artisans and unique stores, some dating to the 1700s . Walking tours are perfect way to know history of a place but we walked around sniffing out ancient homes and offices.

By now, the smell of seafood drew us to one of the cozy patios for my favoured Poutine, tried Lobster, and watched the milling tourists.

Lunenberg is loaded with fascinating and stunning architecture and crafts tucked in every corner and pepped up by a vibrant seafaring culture, quirky and intriguing stories of haunted buildings including a 250 year old cemetery. Well, who wouldn’t want to continue living in this scintillatious town.

For me the feel of the place is more important than seeing and doing the touristy activities. Temptation was there to take one of the boat tours, but time was ticking and we had to return to Halifax.

Every stone, leaf, twig has a tale to tell and when woven together the stories become traveller’s tales. Travtrails or Travelling -Trail is my touristic foray into places known and unknown, the leisurely roaming, the appreciating and cherishing nature and human presentations......the Trail continues.