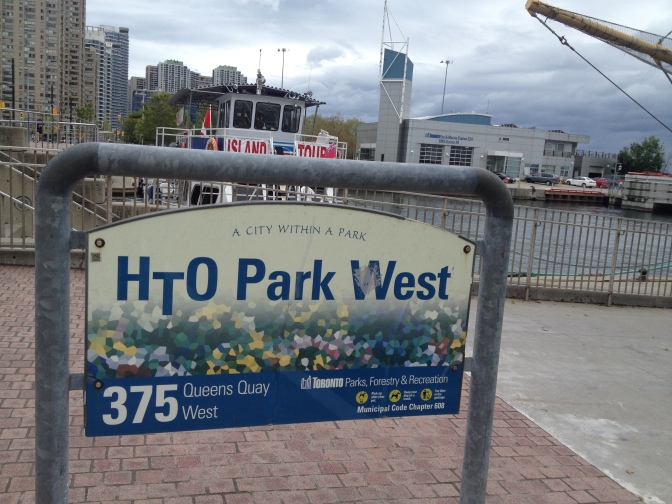 The best way to know a city, especially a city like Toronto with its pockets of antiquity and panache, is walking. I do not know about others but using the services of my two legs gives me a sense of permeability, of understanding a city’s past and present, the mysteries and marvels of urbanity and pastoral.

Toronto has it share of parks, green lungs of a city, and one that is making waves is Park HTO a six-acre public dry white sands beach/park along the Northern Shores of Lake Ontario.  HTO stretches from Bathurst Street in the west, along Queen’s Quay with Eastern boundary on Yonge or York Street and Gardiner Expressway in the North. The omnipresent CN Tower is a spectator and a beacon and as a Torontian pointed out ‘you can never get lost if you follow the tower’ from whichever part of the city to happen to be.

We start from the eastern half or HTO Park West, the site of former Maple Leaf Mills Silos, to walk along the waterfront towards the old Peter Street Slip, once home to industrial units and commercial structures,  gingerly stepping on the white sands, the dry beach dotted with yellow umbrellas and Muskoka chairs. The beach and the concrete paths are a walkers delight with only a metal rail separating land from the water.

The stroll continues on the Wave Deck, reflecting the waves of Lake Ontario, past the Marina with bobbing boats, brightly painted kayaks, schooners with unfurled sails and cruise ships. 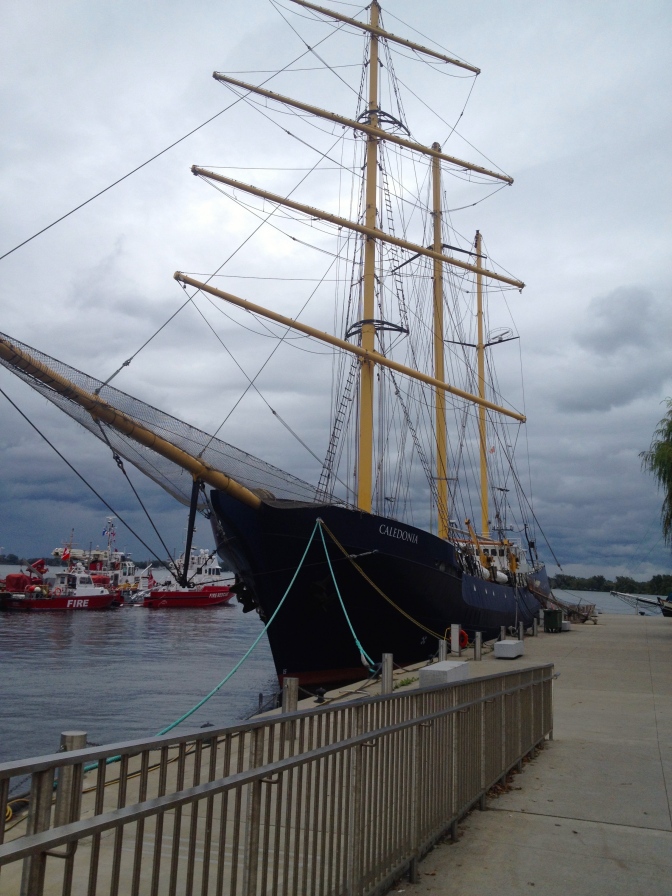 Families and tourists take full advantage of the clear, bright summer afternoon with sun reflected in the unblemished waters of Lake Ontario, picnicking, walking, jogging, skateboarding or flocking towards Harbour Centre, a former warehouse and now converted into galleries and space for cultural events, theater and dance performances and the Jack Layton Ferry Terminal for ferry rides to Toronto Islands. 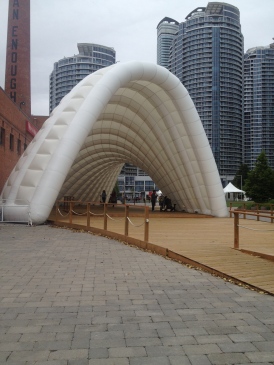 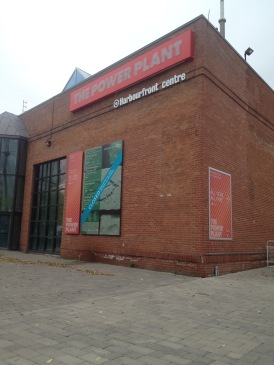 Toronto Islands walk-on: We joined the ferry queue for Ward’s Island and were lucky to manage tickets considering the rush, bikes and pets included. It was the last Summer weekend before the schedule shifted to winter timings.

Toronto Islands were continuously moving sandbars carried westwards by Lake Ontario currents and it was around 1858 that severe storms helped create the Island, completely separating it from the mainland. The Europeans referred to the main peninsula as “Island of Hiawatha’.  The Islands gained popularity as holiday and residential areas with amusement parks, hotels and shops. But around 1960s demolition of majority of construction, with cottages confined to Ward’s Island and Algonquin Island, created open spaces for recreation purposes.

The ferry deposits us, the dogs and bikes, on Ward’s Island on the easternmost part of Centre Island. We make our way towards Centre Island, situated between Ward’s Island and Hanlan’s Point Island, a leisurely 3 km walk on the Boardwalk flanking the lake. Few minutes before Centre Island is the bridge for Algonquin Island another residential area. Ward’s Island is named after the Ward family who had settled here around 1830. David Ward was a local fisherman and it was his son William who constructed the landmark Ward’s Hotel south of the ferry docks at Channel Avenue. Till 1881 the hotel and Wiman’s Bath attracted visitors but by 1922 the hotel building deteriorated to turn into a grocery store and ice-cream parlor.

It is a pleasant, car-free residential area with side-walk streets and a brief stop at the rocky Ward’s Island beach, close to ferry-dock along Withrow Street, we were back on the Boardwalk admiring the frisky waters with bobbing yachts and boats. There is ‘clothing optional’  Hanlan’s Point Beach, a 45 mins walk from Ward’s Island, on the western side of Toronto Island. .

The continuous walk on the boardwalk can get monotonous and best is to stop, sit on benches, take photographs and appreciate the silence. On the left is the stretch of water and on the right the green patches, play areas, clubhouses, Victorian mansions and beach houses shaded by trees in different autumnal hues. There are paths cutting across manicured green spaces, play areas, picnic spots and we took one towards the  Centre Island and the only open food kiosk selling pizzas. There are other eating options but we preferred to relax under the domed sky, people watching.

Close by is Far Enough Farm with common farm livestock and birds, the Franklin Garden, based on the popular children’s storybook character Franklin the Turtle, and Centerville, a children’s amusement park built-in 1967 with a 1900-style turn of century theme. Toronto Islands are clearly a family fun Island with beaches, ponds, boating, restaurants, tram tours and hiking and biking options.

Best time to visit: May to September. One can spend an entire day on the Islands.