Some places disappear to inner recesses of memory till an incident or event resurrects them to the forefront.

In the summer of 2011 Galveston was another beach town for a weekend visit from neighbouring Houston, Texas.

10 years later, in 2021, Galveston metamorphosed from a bleachy, cataclysmic city into a ‘freedom’ icon. I learn that this Island city was the place where on June 19, 1865 the then Union Army General Gordon Granger, through General Order No.3, proclaimed freedom for slaves. Texas was the last state of the Confederacy still having institutional slavery. For the African Americans of Galveston the Juneteenth announcement was a moment of joy and liberation and an annual holiday celebration commemorating the end of slavery. African-Americans from all over the country congregated in Galveston to join in the celebrations. Juneteenth was gradually recognised across the country and in 2021 internationally when President Biden declared the day as a Federal holiday. “A day in which we remember the moral stain and terrible toll of slavery on our country –- what I’ve long called America’s original sin.  A long legacy of systemic racism, inequality, and inhumanity“.

In school (India) the Slave trade was a subject out of our realm, though we enjoyed stories from Uncle Tom’s Cabin, Mark Twain etc. It was later in college and in the present, novels such as Alex Hayley’s Roots (1978) …the life story of an 18th century African youth sold into slavery and transported to North America; The Color Purple by Alice Walker about African American women in twentieth century Georgia; Tony Morrison’s Beloved; The Underground Railroad by Colton Whitehead; The Vanishing Half by Brit Bennett……each book a scathing account of the trauma and atrocities suffered by the African American people… 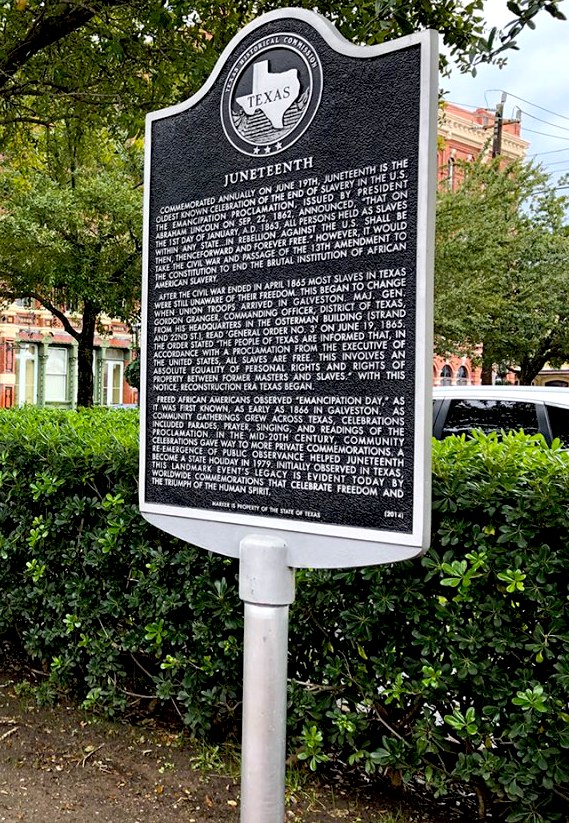 A Juneteenth Marker in Galveston (pic from Google)

Major General Gordon Granger had made the announcements in 1861 at different places in the city…Custom House, Courthouse, the then Negro Church on Broadway and now Reedy Chapel-AME Church. In 2014, the Texas Historical Commission commemorated the site, at the corner of  22nd and Strand, near Osterman Building, where General Granger and his men first read General Order No. 3. There are nearly 200 markers placed at various locations of the city.

It is fitting that the 1861 Customs House historic site is slated to be converted into “The Customs House – Juneteenth Museum.” featuring a boutique hotel, restaurant, and educational activities.

The visit of 2011: The 32 mile drive, from Houston, through bland countryside of sparse vegetation and chemical works, no visible signs of the famed Longhorns, and as we near the Island City the conspicuous remnants of the devastation caused by the Hurricane Ike (2008) added the elegiac notes to the Seawall Boulevard, the renovated residences, the shell of the Balinese Room pier, the once vibrant nightclub extending 600 feet into the Gulf, and the formulaic largest and well-preserved assemblage of Victorian colonial architecture still preserving the watermarks. On September 13, 2008 Hurricane Ike, the Category 2 hurricane with wind speed of 110 miles per hour (180 km/h) and waves about 14 feet, breached the Galveston Seawall flooding the city via storm drains and unprotected bay side.

In the 19th century Galveston or Galvez’ town, named after the 18th century Spanish military and political leader, Bernado de Galvez yMadrid (1746-1786), was a major U.S. commercial centre and largest port. It was the ‘crème’ of Texas as a ‘cotton’ port attracting traders and tourists from different corners of the country and world till it was flattened by a hurricane in 1900. The town limped back as the ‘Sin City of the Gulf’, flaunting casinos and big name entertainment and clinging on to its diverse and quirky flavor of a laid back island city.

Nature had its own agenda and the  ‘Queen City of the Gulf’ was flattened by successive storms (climate and location make this Island city a prime target of tropical storms) leading to loss of commercial importance to neighbouring Houston (construction of Houston Ship Channel ) with its modern infrastructure. Galveston floundered back into contention but was again subjected to continuous natural foul play, the last hurricane in 2008 Hurricane IKE. Precautionary measures for future storms led to construction of a 10-mile long, 17 foot high Seawall to save the city. Instead of a saviour the Seawall resulted in erosion of the natural wide beach, once popular for auto-racing, to a narrow strip of land taken over by encroaching weeds and waves crashing against the rocks at low tide.

As we enter the city the 2008 Hurricane ‘Ike’ trophies preceded us to Downtown, particularly the Strand, once referred to as the “Wall street of the South West’. The water markings were preserved on building exteriors as reminders of ‘Ike’s’ fury. The island was rebuilt with investments in tourism and shipping and construction of Galveston Island Historic Pleasure Pier at site of 1943 original Pleasure Pier, destroyed by Hurricane Carla, that had featured rides, an arcade, an aquarium, concessions, a large ball room and fishing at the end of the pier.

We walked to the historic 1877 tall ship ELISSA designated an American treasure at the Texas Seaport Museum.

This historic city is a walker’s stomping ground and though the stately buggy drivers-cum-guides were welcoming we decided to ‘walk’ to identify the important landmarks of the city such as the 1887 Bishop’s Palace (mentioned in top 100 architecturally significant homes in the U.S.A.), the 1879 Edwardian Tremont House, the Ghost House, the Trumpet House, Moody Mansion Museum, the Cotton Exchange and Galveston Art Center building etc. Modern touches are added with the continuing annual Mardi Gras (February 25) celebration buntings, pubs, galleries and gift shops. Galveston Arts Center is located in the historic 1878 First National Bank Building on the Strand. This Italianate-style 1900 Storm survivor was extensively damaged during Hurricane Ike in 2008 and was temporarily relocated to nearby Market Street. The Center returned to the Strand in 2015 (after our visit).

The Strand National Historic District turned out a better way to appreciate the Victorian hangover of the city. The Galveston Island Railroad Museum on 25th Strand is a must visit, we bypassed it, and from here headed towards the shopping area with more historic buildings converted into stores.

Purchased chocolates from the Rocky Mountain Chocolate factory and gifts from the Old Strand Emporium and  stopped at the Saengerfest Park, a place for touristy activities, to enjoy a father and son chess game on permanent giant chess set. The restaurants along the Seawall Boulevard and the Strand offer diverse cuisine from Greek, Mexican, Italian and fresh Gulf coast seafood.

The past and present mingles as tourists, locals and bikers search for evening entertainment in Downtown or the waterfront. We took a drive around the city admiring its boulevards and private home before heading to the beach, one can park right at the beach, as towards evening the parking spaces are at a premium with cars downloading their barbeques and picnic paraphernalia on the raised Seawall.

From the streets and cobbled lanes to the Seawall, with seagulls adding to the melee, swooping down on unsuspecting picnickers. The choppy and murky Gulf waters was unwelcoming, though there were a few bravehearts risking a swim. We strolled the entire length till it was time to bid adieu to a stodgy city.

1. Moody Gardens with its 10-storey rainforest, a 1.5-million-gallon pyramid aquarium, a 19th century-styled Colonel Paddle wheeler complete with hour-long narrative cruises, a Palm Beach and a memorial for Vietnam veterans.

4 thoughts on “Galveston..Memories and Prejudices”