It is the time of the year, again, when Hong Kong pulsates to the beat of drums and swish of oars as sleek boats leviate down the waters.

The Tuen Ng Festival or Duānwǔ Jié or Dragon Boat Festival is a traditional festival that was celebrated mainly by fishermen who competed in the boat races. Today, the traditional race has metamorphed into a modern sport accompanied by on shore celebrations and parties. The wooden boats have been replaced by fiberglass and wooden paddles by carbon fiber ones. The constants are the ‘dragon heads’ and ‘tails’ talismans to inspire.

The Festival is dependent on the lunar calendar and this year it is June 25, a public holiday. Covid might have spoilt 2020 celebrations (races have been postponed) but the festivities continue.

2012: We are at Tai O, on the north-western coastal edge of Lantau Island, having taken the West Rail from Hung Hom around 7.30 am and switching to Tung Chung line at Nam Cheong station. From Tung Chung the bus, No 11, brought us to Tai O through verdant green hills of Lantau west. We are early, around 8 30 a.m. The onlookers, including volunteers, cheering groups and tourists, are slowly filling up the Promenade that stretches from the bus terminus all along the lagoon. The dragon boat races of the traditional Tuen Ng Festival or Dragon Boat festival take place at different locations across Hong Kong and these are Sai Kung, Sha Tin, Tuen Mun, Cheung Chau, Tai Po, Aberdeen, Discovery Bay and Tai O on Lantau Island and Stanley which hosts the Stanley International Dragon Boat Championships on same day. 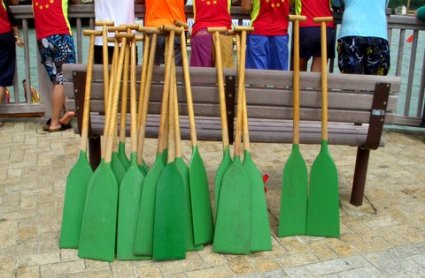 The Tai O promenade is resonating with different rhythms of pulsating drum beats, the swish of the oars as the dragon head decorated boats glide past the fluttering buntings and flags dominated by color red, cheer groups, paddlers in their neon jerseys, jostling, waiting, standing around, and stalls offering free drinks and snacks. The prize treat of roasted pig enjoys center stage amidst enthusiastic spectators.

The verve and competitiveness of the race overtakes the traditional festivities as the sleek 10 meter long dragon boats are propelled by synchronized movements of 20-22 paddlers, sitting two abreast with steersman in the rear and a drummer in front. The carved and painted dragons heads and tails and the drum beats transfer extra energy to the rowers and one can glimpse the rippling muscles and concentrated visages eager to win the trophies on display on the stage.

We watched for some time, the brochures as well as announcement was in Chinese, and walked over to the Tai O water village to observe further festivities of the Tuen Ng Festival. The festival is in honour of the popular Chinese national hero Qu Yuan who had drowned in the Mi Lo River nearly 2,000 years ago while protesting against the corrupt rulers of his time. When people heard the news of his drowning they set out in boats to rescue him. Unable to find him they beat drums to scare away the fish and placed boiled rice folded in bamboo leaves to protect his body from becoming fish meal. The folded rice is believed to be a precursor of rice dumplings. 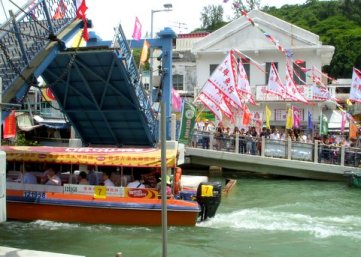 Tai O Dragon Boat festival includes the traditional ‘Deities’ Parade’ organized by the local fishermen’s organizations of West Lantau.  Before the races, members visit the four temples Yeung Hau, San Tsuen Tin Hau, Kwan Tai and Hung Shing to carry the deities to their associations’ hall for worship. On festival day members of Pa Teng row the dragon boats to Po Chue Tam behind Yeung Hau Temple, to follow ‘Picking the Greens’ ritual of placing fresh grass, from the hillside, in the dragon’s mouth. We did not see the rituals but I believe in olden days there was another a “Drinking Dragon” ceremony when few drops of rooster blood mixed with Chinese white wine and sprinkled on the dragon’s head, tail and body.

Once the grass ceremony is over the dragon boats follow the small boat carrying the deity statues towed by a dragon boat along the waterways. The residents of the  stilt houses and the village  burn joss sticks and gold silver paper offerings for departed souls as the boats sail past. Other traditions include eating zongzi*, wearing perfume pouches, tying five color silk threads and hanging mugwort leaves and calamus above doors, kitchens and bedrooms to rid of misfortunes and summer calamities.  The silk perfume pouch and the five-color silk thread tied around a child’s wrists, ankles and neck, considered protectors against evil and is to be un-knotted on a particular day.

The narrow lanes were crowded with tourists and residents hanging on to the railings along the waterfront or sitting in vantage points on the slightly shabby stilt houses or pang uks along the water, waiting for the deity carrying dragon boats.  There was an extended time gap between the arrival of boats and the restive crowd would patiently wait for the new manually operated drawbridge across the narrow creek to be levered up for boats to pass and then levelled for pedestrians to cross over to the market and village lanes. This bridge is a replacement for the 85-year-old rope drawn ‘ferry’ bridge for crossing the creek.

The smell of cooked and dried fish and other delicacies added to the sea front village ambience as we strolled along the lanes lined with stalls selling food items, tourist souvenirs including pearl strings, my friend bought one, and general items.  A resident advised us to take a cruise along the creeks and mouth of Pearl River delta to watch the dolphins. It sounded an excellent idea but unfortunately it was not the right day for this particular tourist activity as others had same idea. There was a long queue at the pier.

A few more hours watching the winning teams celebrate, the ‘Pig” was still in shape, strolling the promenade, of watching the festivities, it was time to move on. We took the bus for Po Lin monastery for a glimpse of the benign Buddha beaming down from amidst the dark clouds. The Po Lin Monastery cafeteria is famous for vegetarian food.

A day to remember.