Lockdown re-posting of a breathtakingly panoromic journey to Sikkim in May 2017. Facebook has the uncanny knack of reviving memories of places one can visit multiple times, virtually.

The 45 minute drive from Gangtok, capital of Sikkim, to Rumtek Monastery, 4900 ft above sea level and 24 km from Gangtok, is a natural delight of lush green hilly terrain and misty mountains, hillside villages, terraced fields, sheer valleys, gurgling streams and waterfalls but the bumpy scratchy road (under repairs due to constant landslides and widening exercise) seems never-ending as the driver manoeuvres the thin ribbon of tar blocked by road rollers and boulders and steep drops down the mountains. Rumtek, nestled on the hills opposite Gangtok, stands tall in its Tibetan splendour amidst the verdant Himalayas and this is one sight we would have missed if we had listened to our cab driver. ‘The road is bad, real bad, and do you still want to go”. Our collective, angered response “we have come all the way from New Delhi for this and no roads, bad or broken, can deter us”.

We set off from Downtown Gangtok and thankfully on time …. 7 am, as after this the city roads become serpentine queues for exiting and entering vehicles. The drive out leaving the early morning city pantomimes of garbage collection, washing of utensils outside crowded homes, children lining up for school buses is soon forgotten and we immerse ourselves in salubrious surroundings. 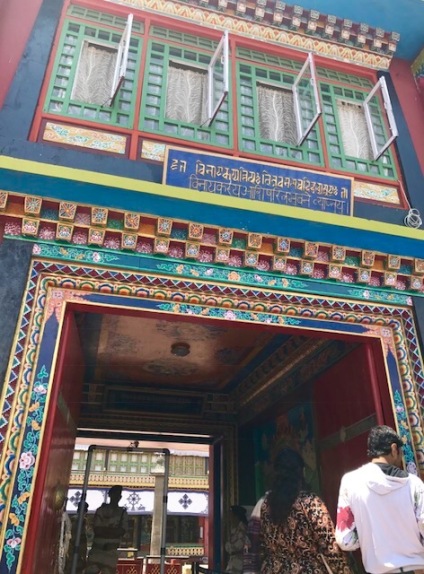 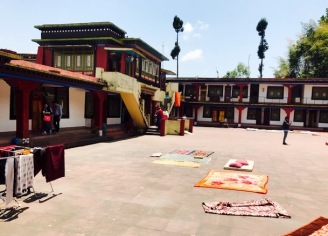 Finally, we are at the main gate manned by security personal and it takes a minute to register the army presence at entrance of a peace abode. There is more security inside, something to do with the succession battle between the two rival organizations, Karmapa Chatitable Trust and the Tsurphu Labrang, supporting different candidates for 17th Karmapa choice. From the gate it is a long winding mountain walk to Main Hall and we request the guards to let the cab drop us to the Monastery. The request is granted after checking Id and ₹10 entry ticket, more security, frisking, face-to-face with a laid back Labrador, we walk inside a courtyard strewn with drying clothes or hanging on lines. 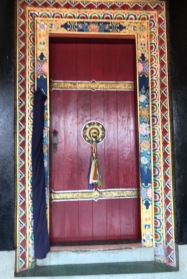 Rumtek Monastery or the Dharma Chakra Centre in eastern Sikkim, India, is one of the most important centers of Kagyu lineage of Buddhism, and is the seat of His holiness Gyalwa Karmapa, the 16th Karmapa and the charismatic leader of the Karma Kagyu order of Tibetan Buddhism. Built on the likes of the Kagyu headquarters in Tibet, Rumtek was originally built under direction of Changchub Dorje the 12th Karmapa Lama in mid 1700s. It was in ruins by the time Rangjung Rigpe Dorje, the 16th Karmapa, arrived in Sikkim from Tibet in 1959. The Karmapa was offered alternate land by the Indian government but the ambiance, snow-capped mountains, clear streams and pristine forests,  motivated him to rebuild the monastery at the same spot away from footfalls and development roars. In the present we can see approaching commercialism with settlements and markets. Financial help from the Indian government, the Sikkim royal family and the local people helped complete Rumtek in four years. It was inaugurated by the 16th Karmapa as his main seat in exile and installed with the sacred items and relics from Tsurphu Monastery, the Karmapa’s seat in Tibet.

History and architecture is forgotten as we stroll the encircling corridor, ablaze in vibrant colours of ceilings, doors, windows and curtains, till we reach the Main entrance with traditional Buddhist design and layout. I am tempted to knock on one of the doors, to peep inside, then remember it is a monastery. The Main temple is surrounded by monks’ quarters that enclose a spacious stone courtyard for ritual lama dances to commemorate significant dates in the Tibetan Buddhist calendar. The Main Door is guarded by life-size images of the Four Guardians of the universe: Virudaka, Virupaksha, Dritarashtra, and Vaishravana, protecting the east, west, south, and north cardinal directions. The Guardian Kings are depicted at the entryway because they had approached Buddha ,after his Enlightenment, and promised to protect all his monasteries and temples in the future.

It takes time to adjust to riot of colours of the resplendent interior of beautifully done Buddhist artworks, wall murals and thangkas. There are nearly 1001 miniature gold Buddha statues inside the monastery. Photography is not allowed and we miss out on rare artworks. Maybe, in future I should doodle on paper in places where cameras are not permitted.  To the right and rear of the Main Shrine Hall are the Mahakala and Mahakali Shrine Rooms, where a puja (prayer ceremony) is held every morning and evening. To the left are the two gonkhangs or protector chapels of Tsering Che Nga, female protector of the Kagyu lineage and Dorje Drolo, the wrathful emanation of Guru Padmasambava.

The cordoned interior, crowded with artefacts, tourists and  monks is no place to loiter and few moments admiring the ornate holy throne awaiting the 17th Karmapa, we make our way out. The special ‘Black hat’, worn by Karmapas during festivals, is under lock and key at the Monastery and no one knows when it will be worn by the still to be elected 17th Karmapa*. The first Karmapa was given strands of hair from 10000 fairies as a boon for his meditation and those strands were woven into a black hat. 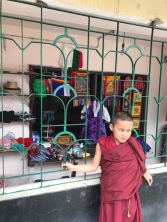 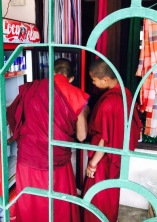 Out in the courtyard we head for the tiny convenience store, opposite the entrance, for sodas, water and gifts. My friend purchased a Tankha as souvenir and we make place for a group of young monks deciding on patties as lunch time snack. A girl, probably 4 years, addresses them as ‘Monk-ies’ and the ‘boy’ monks are impassive and un-amused. Maybe it is the language barrier. 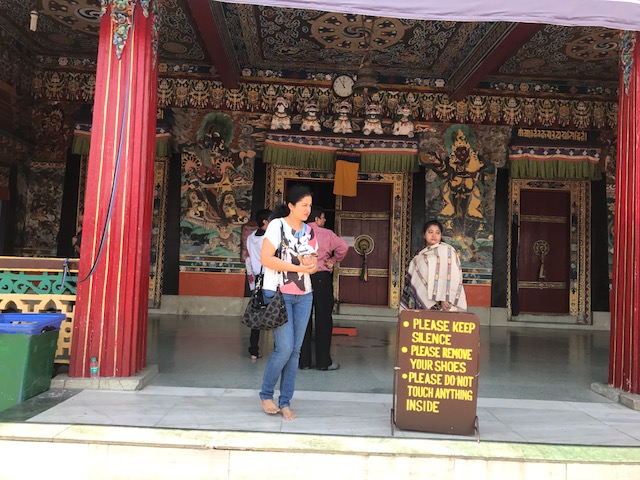 The tourists, devotees, security  create a “panoramic awareness of the vastness of space” of the daunting Himalayas.

*: Rumtek or Dharmachakra Centre, is a Gompa and the reason for tension within the Karma Kagyu school of Tibetan Buddhism. The ongoing legal battle in Indian courts between the two organisations supporting different candidates for the 17th Karmapa surround the monastery in a haze of mystery and intrigue. The battle between the two organisations,Tsurphu Labrand and the Karmapa Charitable Trust, has been going on since 1992 and neither candidate resides at the monastery.

Other Attractions
Just few strides away is the Nehru Botanical Garden which has a mix of tropical and temperate plants and trees as well as a big greenhouse of exotic orchids. For children there is a small playground with swings, see-saw and a winding footpath ideal for a stroll. We did not stop at the Garden as we had to let go of the cab.

Timing: The best time to visit Rumtek Monastery is from March to late May and from October to Mid-December.

How to Reach Rumtek Monastery:

By Air:
The nearest airport, Bagdogra airport, West Bengal, at distance of 124 kilometers is connected to all major cities in India. There is also a helicopter service available that connects Bagdogra to Gangtok.

By Train:
The nearest rail stations are at Siliguri situated 114 km from Rumtek and New Jalpaiguri railway station about 125 km from here.

By Road:
Rumtek is well-connected to rest of India through an extensive road network. Regular bus services from Bagdogra, Darjeeling, Kalimpong and Calcutta are iavailable for Rumtek.  Rumtek. Taxi services are also available from these cities.