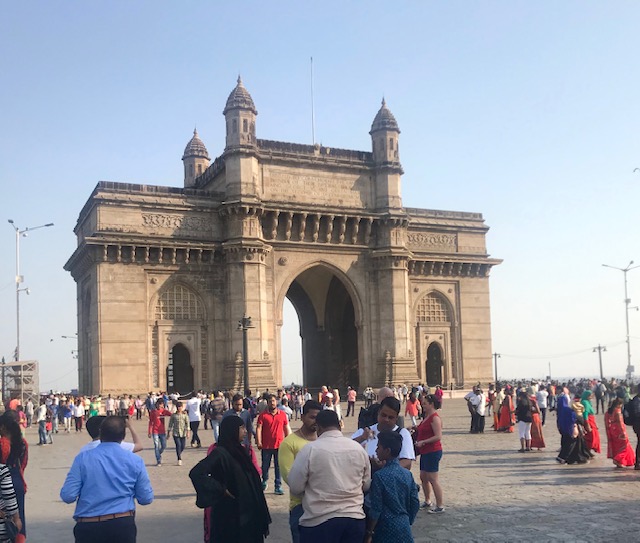 The Gateway of India, Mumbai ….the symbolic doorway to India welcoming visitors… the friendly and not so friendly. It was a symbol of power and majesty constructed by the British to commemorate the arrival of King George V and Queen Mary  to India in 1911 for the Delhi Durbar. They were presented with a  cardboard  version as construction started only in 1915 and completed in 1924. To India, today it is a legacy of colonial rule.

The Gateway was witness to the pomp and pageantry of the arrivals and departures of British Viceroys and Governors and of the First Battalion of the Somerset Light Infantry in February 28, 1948,  The last exit signalled the end of British rule in India.

Design: An iconic landmark of Mumbai, the Gateway is an instant draw for tourists and locals who flock to admire the  imposing Arch, the intricate latticework , a  48 feet wide Central Dome and 4 turrets that are a prominent feature of the entire structure. Steps lead to the Arabian Sea and the five jetties, located around the Gateway, for commercial and private use. It was from here that the perpetrators of 2008 terrorist attacks landed on Indian soil

Location: The Gateway of India, at Apollo Bunder, Colaba, faces the Arabian Sea on one side and on the other the Taj Mahal Palace Hotel. The hotel was centre of 2008 terrorist attacks were the perpetrators of the attack took the scenic sea route. As result  public access to the Gateway and the hotel is barricaded controlling the flow of tourists.

4 comments for “Doorway to Abundance….Gateway of India”