How does one deal with arrogant two-wheel drivers…..ignore them or honk them out of way. We tried both but to no success. They are immune to any noise even without helmets…. as this father, with his teen daughter riding pillion, in middle of road. There was no reaction to constant honking, anywhere else it would be a crime, and he did not make way. We followed as long as he intended to own the road. Finally he turned to a side lane and I could not resist glaring at his daughter or whoever it was.

We do not have exclusive right to Pune’s pot-holed roads but then there is something like traffic sense. In Gurgaon/Delhi we criticized the often unruly cab drivers, bus drivers, private vehicle owners but in retrospect the traffic was disciplined and roads wider and drivable. It is a case of ‘love me love my pet’ with no end to harrowing, teeth gnashing, hair-pulling experiences and like true soldiers we drive on. Pune is a Cantonment city but the services discipline has not percolated down to the civilian population. Single or double lane narrow roads turn into four, six or eight-lane freeways with two wheelers weaving their way through the chaos. In simple speak….Pune is a city for the young, the brave, the movers and shakers and as they pour in from different corners of the country, a potpourri of attitudes and maneuverings.

Thankfully, I have still not taken to the roads (post open heart surgery) but the stress is palpable and my vocabulary  seasoned with newer four letter words used at every bend and screech. On earlier visits to Pune I admired the sagacious mummy-fied girl riders and their independent spirit. But staying in the city I find them outperforming their male counterparts, refusing to give way whilst glued to cell phones. The problem is one cannot say anything to them… thanks to all the legalize surrounding women.

‘You will get used to Pune traffic’. Try to avoid office hours, mornings and evenings, when entire city is on the roads, festival days and week ends. So when do we move out? The ineligible addition is  ‘stay in your society and enjoy the comforts of home’. 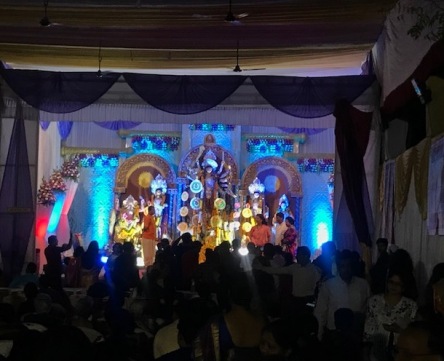 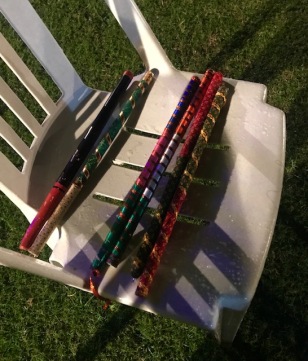 Festival Speak: Ganesh Chathurti (Lord Ganesh celebrations), Durga Puja, Dussera, have come and gone and now we await Diwali, the festival of lights. This was my first Durga Pujo after a long long time. The last Pandal hopping I did was as a youngster in Allahabad and after that avoided them due to crowds. There is a sizeable Bengali presence in Pune and celebrations are held in different areas of the city. The one we visited, invited, was in the neighbourhood and rain or no rain the programs continued. After all there is heavy investment in ‘Pandal’ (stage) decorations, singers, dancers, in food, clothes and gifting. Celebrations stretch for 10 days and awaited for a full year.

Durga Puja or Durgotsava is a Hindu festival celebrated across India and abroad by the Bengalis. Similar to other Hindu festivals this too is ‘celebration of victory of good over evil’ and is continuous with Dussera or Vijayadashmi..the victory of Lord Ram over Ravana.

2. The second event, continuation of Dussera, was Dandiya Raas or dance held in our society club house. Young and not so young danced away the night on Hindi film songs. It is a complicated dance for people with two left feet, requires synchronisation between hand, feet, music, and I watched the whirls and hits.

Dandiya, performed in Goddess Durga’s honour, is actually staging a mock fight between Durga and the demon king, Mahishasura. The sticks (dandiyas)  represent the swords of Durga but watching the men, women, children in traditional colourful dresses, brandishing colourful sticks, it is a whirl of romanticism and poetic justice. You can flick your ‘enemy’, intentional mistake, while tapping the dandiyas . Garba is basically associated with Gujarat and I remember going to few events in Muscat where the Gujju diaspora, joined by others, celebrate with gusto.

I await Diwali, my favourite festival, as we get to re-connect and re-decorate house and splurge on clothes, jewelry and whatever else one wants. “Most festivals in India share and support a single concept. They might be multi-lingual or multi-cultural but they all have one unique common quality i.e. binding communities”

I am looking forward to Diwali celebrations in a new city and hope it will be a fresh chapter in our lives.

Next: Thoughts on Me Too” and of course ‘Diwali’