Doors, big or small, of metal, wood, steel, glass are change facilitators, communicators, blockers, ventilators or simply ritual-significance additions. To me there is always an element of mystery attached to a closed door and though this one was too heavy for me to push open the mini entrance was a walk way into a world of intrigue, romance and destruction. 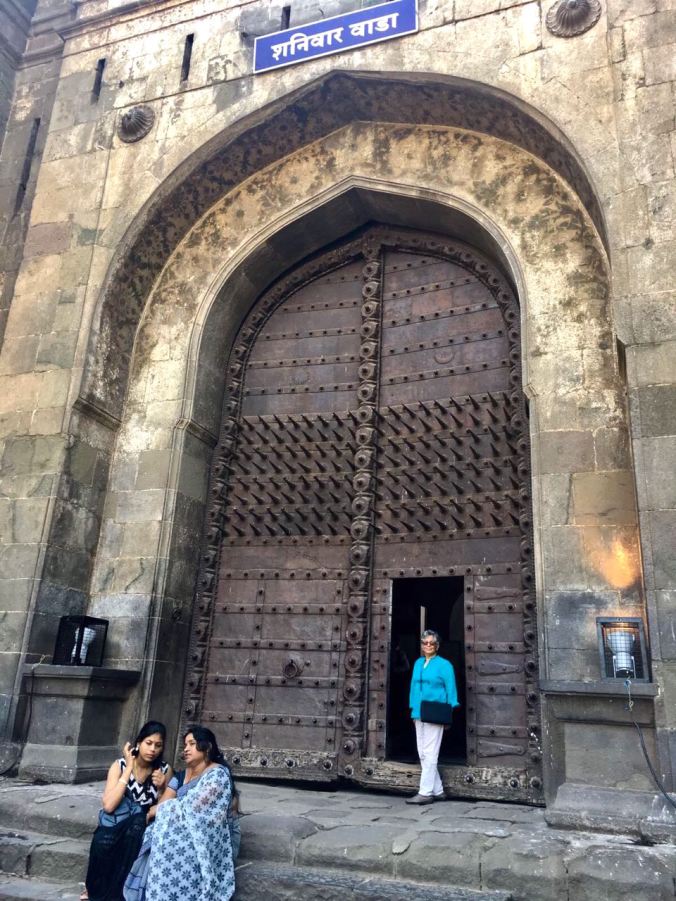 Dilli Darwaza (door) the twenty-one feet majestic main entrance to Shaniwarwada in Pune is a symbol of power and national aspirations of Maratha chieftain Baji Rao 1. Standing in front of it I could visualize the Darwaza as deterrent to invading forces, a protector of the people and families inside, a window to the best of Maratha and Mughal architecture of Medieval India. One can still see the steel pikes, arrow-loops and machicolations to facilitate pouring of boiling oil, deterrents to enemies.

Mastani and Baji Rao’s romance and later marriage is the subject of a Bollywood (India’s film industry) historical film Bajirao Mastani and the present crowds flocking the ruins and the Light and Sound shows, probably want to relive the story of Mastani and her king. We too had similar intentions and though the fort is not as impressive as the Mughal forts of Agra and Delhi, there is enough pathos and intrigue to attract crowds. The fort was partially destroyed in the fire of 1828 and what we see… the walls, gates, bastions and manicured enclosed gardens with lotus shaped fountain or the Hazari Karanje (Fountain of a thousand jets) are symbols of lost grandeur. The Fountain, shaped like a sixteen-petal lotus with each petal having sixteen jets with an eight-foot arch, was considered one of the most intricate fountains of its time in Asia and Europe.

Reporter/researcher/ feature writer/content writer/blogger/...a quirky and unusual journey tinged with the realistic and make-believe. From news reporting to travel writing and now knowledge with enjoyment and learning... to know people, places, pastimes and pleasures 2020 was a breather we needed to recoup, rejuvenate for a sustainable travel agenda and hopefully a better world. The travel bus is still stalled but stay tuned in for virtual journeys to known and unknown lands.