It is silence all around…silence not of human voices or moving traffic but silence of space. Calgary in winter does justice to its name source, the Old Norse words Kald and Garf to describe ‘cold’ and ‘garden’, words used by Vikings when they resided in the Inner Herbides.

The snow is intimidating and you tend to tread softly like the ducks along the frozen banks of Elbow River meandering close to Downtown Calgary. The frosty ambience fails to camouflage the traditional and the remarkable , the streets, malls and parks of this burgeoning oil city 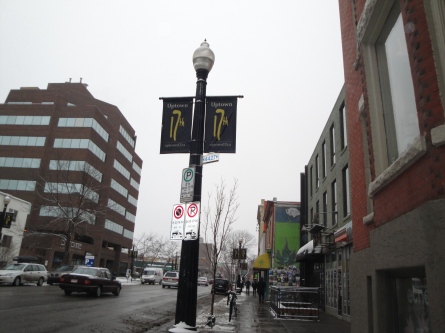 The three-sided 1911 red stone Devenish Building stands out in the setting.  Previously an apartment block the building was converted into commercial space with specialist stores and brands tucked in between the old wooden staircases, narrow passages and hardwood floor bathed in decades old musty smell.

In contrast is the artsy nook, the 1973 Rubayiat, the

8500 sq.ft display of jewelry, art glass, furniture, pewter and other crafts from different corners of the world. The showpiece is the ‘tiller’ or the old cash machine and it was working.

The ideal time to explore 17th Avenue is summers when the blooming flowers  mingle with evening banter and music and the Avenue plays host to the annual  Chalkwalk and Arts festival. The Elbow River park nearby is the spring and summer get away.

Tired out by the winter time quietness the Poutine at the BIG CHEESE POUTINERIE revs you up. This is a Quebec originated version of fast food, now popular across Canada, of French fries and fresh cheese curd covered with brown gravy or sauce and added toppings of veggies or meat. I tried the veggie  (mushrooms etc.) and somehow think one has to develop a taste for it. But it helped  in spending rest of afternoon stepping in and out of stores and admiring the craft pieces adorning corners and store frontal.